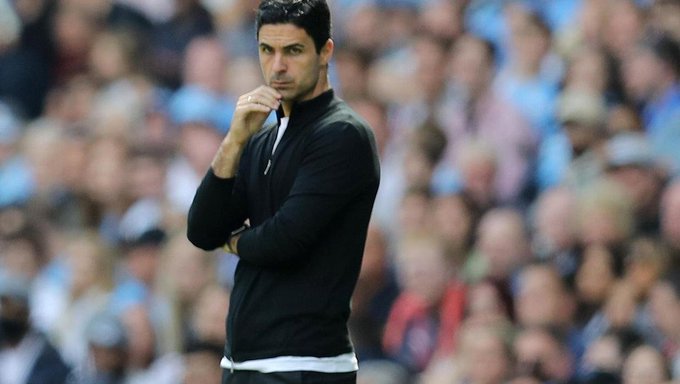 This type of linear thinking is why football fans around the world need to change their way of thinking. All a manager can do is control the confines of his own club – if the league around him is also really good & it means they finish 5th as opposed to 4th, that’s okay.

Arsenal should be looked at as a sole entity, & not in comparison to the rest of the league. The team needed a technical goalkeeper, a back up left back, a centre back alongside Gabriel, starter at right back & technical depth at CB (Tomiyasu), a #10, & CF. All boxes ticked bar one.

However, in terms of prioritisation, Arteta couldn’t have done a better job. He wanted Tammy Abraham and lost out but prioritised more important holes over that such as technical quality in the build-up, depth in between the lines, a left-footed left back behind Tierney..

All of the players he has signed have proven to be top class from a physical, mental and technical perspective. Lokonga is another one who is a top upgrade with massive potential on an underperforming Ceballos. Again, superb business in a position Arsenal needed depth/quality in.

So, the progress of the team from a technical (build-up play, controlling games with the ball), tactical (the players are finally able to replicate Arteta’s top quality strategies), and physical viewpoint (there are no lazy or physically deprived players anymore) has quadrupled.

THAT is progression, not the difference between finishing 4th/5th based on a couple of dropped points here and there from an inexperienced bunch of players. This Arsenal team are the youngest in the league yet Arteta should be sacked if they don’t finish in the top four? What?

Real progression is based on qualitative parameters and that, in turn, replicates itself within the league table. However, top four isn’t anywhere near as easy as it was to get in 2021 as it used to be. The competition is United with Ronaldo, Fernandes, Varane, Sancho, etc, etc.

The competition is also a Conte-led Spurs who is one of the best managers in the sport along with players like Son, Kane and Ndombele. Again, then there’s the likes of West Ham who would easily finish in the top four in the early 2010’s – a Benitez-esque Liverpool side.

Even without considering the quality in the league, the parameters are illogical. Let’s say Arteta’s Arsenal are winning 2-1 in the 93rd minute of the season to get top four & then they concede a corner to draw & they drop out of the top 4 – He should be sacked based on a corner?

Or should we consider the phenomenal progression of the team from a sheer laughing stock for the last decade to an Arsenal team that finally has players with top physical, technical AND psychological qualities – not toxic and lazy individuals like Nasri, Ozil and Guendouzi.

So, within a real-world example, let’s take Klopp’s Liverpool. They beat Middlesbrough on the final day of the season to get into the Champions League. If they hadn’t, would it have been a bad season? Would it have effected their ability to sign players from mid-tier clubs?

That’s another misconception – that players join clubs based on Champions League football. Listen, of course it applies in certain circumstances, but when players are young and time is on their side (Arsenal & LFC’s market), the attraction of these clubs outweighs CL football.

What is absolutely far more attractive is the fact that Arsenal/Liverpool are massive clubs, that they play beautiful football and are teams with clear potential to challenge at the very top of the sport and are (were in LFC’s case) one or two players away from exploding.

Liverpool were maintaining their league position and form in the first half of the season in which they first got into the CL under Klopp, so it’s not like they exploded straight away. However, they were still one or two players away.. Coutinho out, VVD/Ali in. Rest = history.

Arsenal are the same. Their first XI is fantastic, exciting and will give any team in world football a top, top game, but it’s flawed. They lack experience and they lack one or two players who could take them to the very, very top and propel the squad along with extra depth.

So, the parameters that rebuilds & teams in general should be judged on is their own individual progression. Results in the league provide a decent indication of that, but long-term, when the team progresses little by little each season is a true measure of progress.

However, good luck telling that to the average fan who lacks patience and only measures success based cups won. Apparently Mourinho’s Utd were going to explode after they won the treble. They regressed because the league got better & their own individual progression was negative.

The fact that Arsenal are in the top four is an overachievement. The team have produced inconsistent performances all season due to the teams inexperience, but that in itself is all part of the process. Arteta is moulding this group into his own, idealistic vision of football.

Progress is starting to rear its head in the real world, but Arsenal are not there yet. As I said, they lack depth and reliable top quality at either end of the pitch to enable them to explode. The progression of the youngsters is so encouraging, so trust progress vs results.