Calmness is required. Arsenal are merely in the middle of a rebuild and have a top manager at the helm and the progress that has been made this season is incredibly clear. Below, in this in-depth thread I explain why calmness is required.

Arsenal’s build-up was good & they had aggressive tactical intent but had poor quality chance creation methods due to balance + quality. Tomiyasu can’t attack and neither can Xhaka. It was left to Tierney and Martinelli on the left (not even two attackers) & Saka/Ø on the right.

#1) Good build-up structure but the quality was poor with the likes of White playing daft, floated passes or under-hit passes and Party carelessly giving the ball away (yet again). Gabriel was also poor technically.

#2) Aggressive tactical intent although it wasn’t ideal because Lacazette didn’t look particularly bothered to press but isn’t a good athlete so is a bad presser anyway. 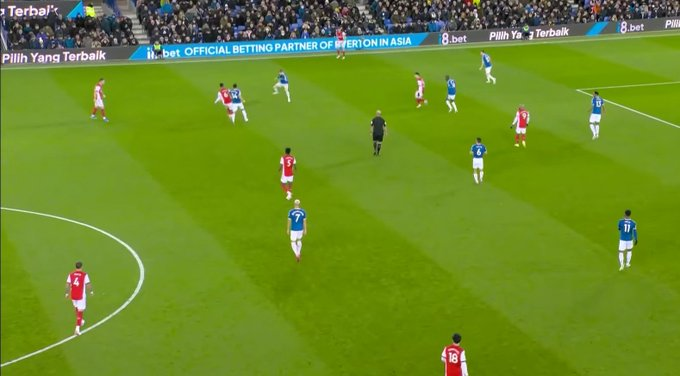 Arsenal started the second half well by controlling the game with the ball after going 1-0 up through one of their methods of chance creation – a combination on the left and Tierney cross (just because they scored from it once doesn’t mean it’s reliably good).

However, after that Arsenal did what they typically do after going 1-0 up & that’s allowing the opposition to have the ball with ease when building play i.e. Arsenal fall back into a low block. Everton scored an offside goal after Arsenal didn’t press two triggers (Allan/Coleman).

Two individual errors then occurred after the root issue occurred with White not stepping out to dispossess Doucoure’s loose touch (it is and looks worse in real time) & Gabriel strangely not sticking out his left leg to intercept the pass. Teams lose control when defending deep.

White and Gabriel are good players but they excel in aggressive and front-footed systems (particularly White). If they are regularly having to defend deep they’re not overly likely to do a good job of it. That’s what the likes of Tarkowski/Mee excel at, not technicians like White.

Then, considering that Everton are not a high pressing team, Arsenal had opportunities to build out from the back, keep the ball and either exploit Everton or regain control after being pushed back. They did neither. They kept carelessly giving the ball away – even Xhaka did.

The only player who did not give the ball away carelessly was Ødegaard who was superb yet again.

So, at that point Everton scored because Arsenal kept inviting them to and then just like the United game Arsenal started to play football again after losing their lead.

Saka, Arsenal’s biggest difference maker, created a golden chance for Nketiah who of course missed a sitter in typical Aubameyang fashion before Everton’s outlet Gray scored a goal for them in transition to win it. So, what are the implications of all of these events for Arsenal?

Well, firstly, it’s clear Arsenal lack depth in attack behind their best attack. Their best attack is inexperienced, but it’s still good despite its lack of experience and track records at the elite level. However, behind it is the likes of Laca and Pepe, so they need a starter.

Arsenal need to relegate one of their young, high quality attackers to a rotational option in the way that all top teams do (City, Liverpool, etc). This isn’t to say Arsenal need to replace Smith-Rowe, Ødegaard, etc. It’s simply to say they need to upgrade their attack.

Arteta also needs to come up with a solution to Xhaka playing alongside Partey in this current system. Arsenal’s creativity on the left is significantly worse when he plays despite his ability to find high quality passes. Secondly, comes the bigger issue – Arsenal’s immaturity.

Arsenal started the second half well by controlling the game with the ball when winning which isn’t a typical theme for them this season. They typically drop off straight away. Arteta’s half-time team talk would’ve made a difference there. However, that waned quickly.

Arsenal struggled to maintain that technical security which saw the crowd get behind Everton which made the game chaotic because Everton thrive in second ball situations and transitions. Arsenal had many opportunities to get the ball down and regain control but were reckless.

Everton scored and Arsenal began to control the ball again. So, the evidence is clear – Arsenal are worse when winning whether that be against possession based teams (where Arsenal stop pressing & sit back) or against low blocks (where Arsenal carelessly give the ball away).

This stems from a negative and passive mindset as opposed to an aggressive one i.e. not being brave by continuing to press/control the game with the ball. It’s easier to sit off and be passive. I’ve discussed this many times with Arsenal. However, it’s an issue that won’t last.

Arsenal are still at the beginning of their rebuild, and they have an unbelievably young and inexperienced team. As such, it’s only normal that they have inexperienced reactions to adverse situations. It’s harder to showcase quality/maturity when you have something to lose.

This issue will not last. The structure is clearly good along with the players which is why Arsenal keep going ahead in games. However, they’re young, and lack leaders AND depth. A rebuild isn’t an overnight fix. I’ve warned Arsenal fans about this – top four isn’t realistic. 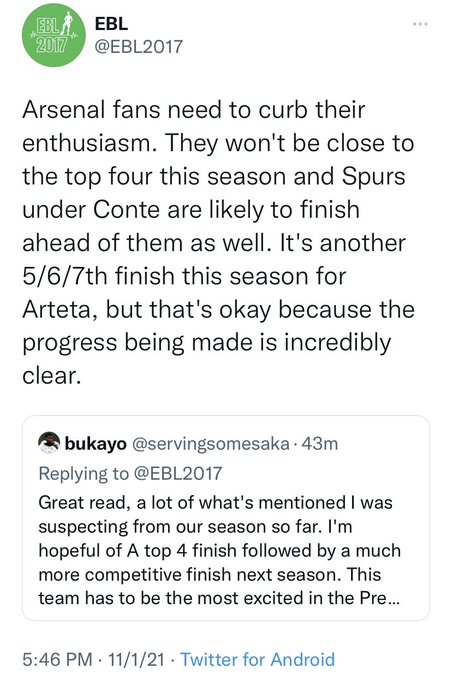 With added experience (natural time with the current crop combined with game experience at the elite level along with new, ready-made signings) & leadership this team will explode. However, the word process implies time, & that there’s a means to an end. Fans have gotta trust it.