Rangnick’s first game at Manchester United showcased a number of tactical intricacies which ultimately resulted in United producing a good, well-rounded & compact performance for the first time this year.

Below, in this in-depth analysis, I showcase how he achieved that.

In possession, United set up in a 4-2-2-2 on-ball shape which afforded them an overload in the build-up, natural compactness in defensive transition thanks to the presence of the two #6’s, and opportunities to progress play to the two #10’s in the half spaces and split strikers.

Against Palace’s settled low block, this positional play allowed for combination play on each flank and half space thanks to the positioning of the players. The fullbacks would push on to join the midfielders and attackers creating potential for combination play to take place. 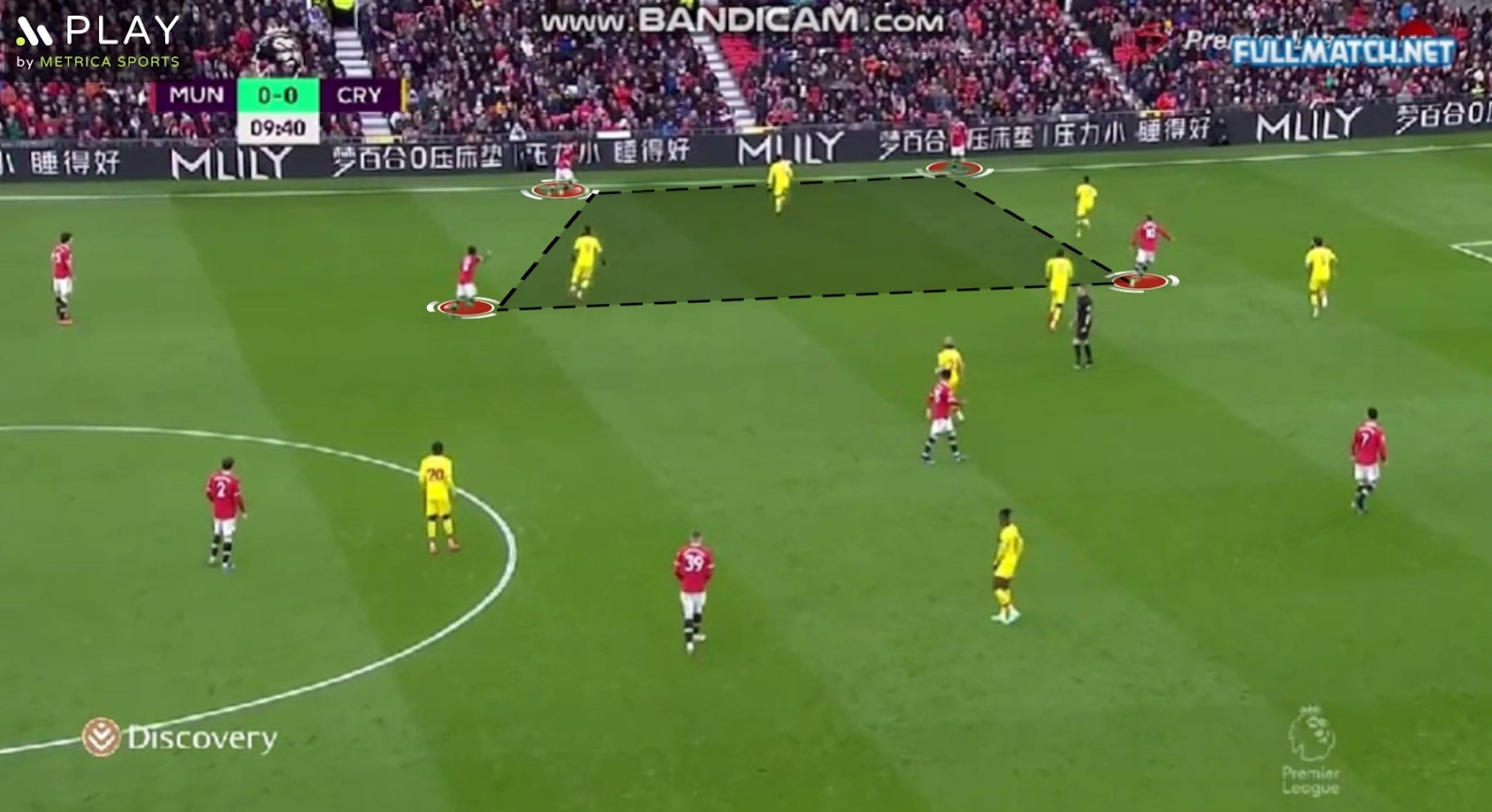 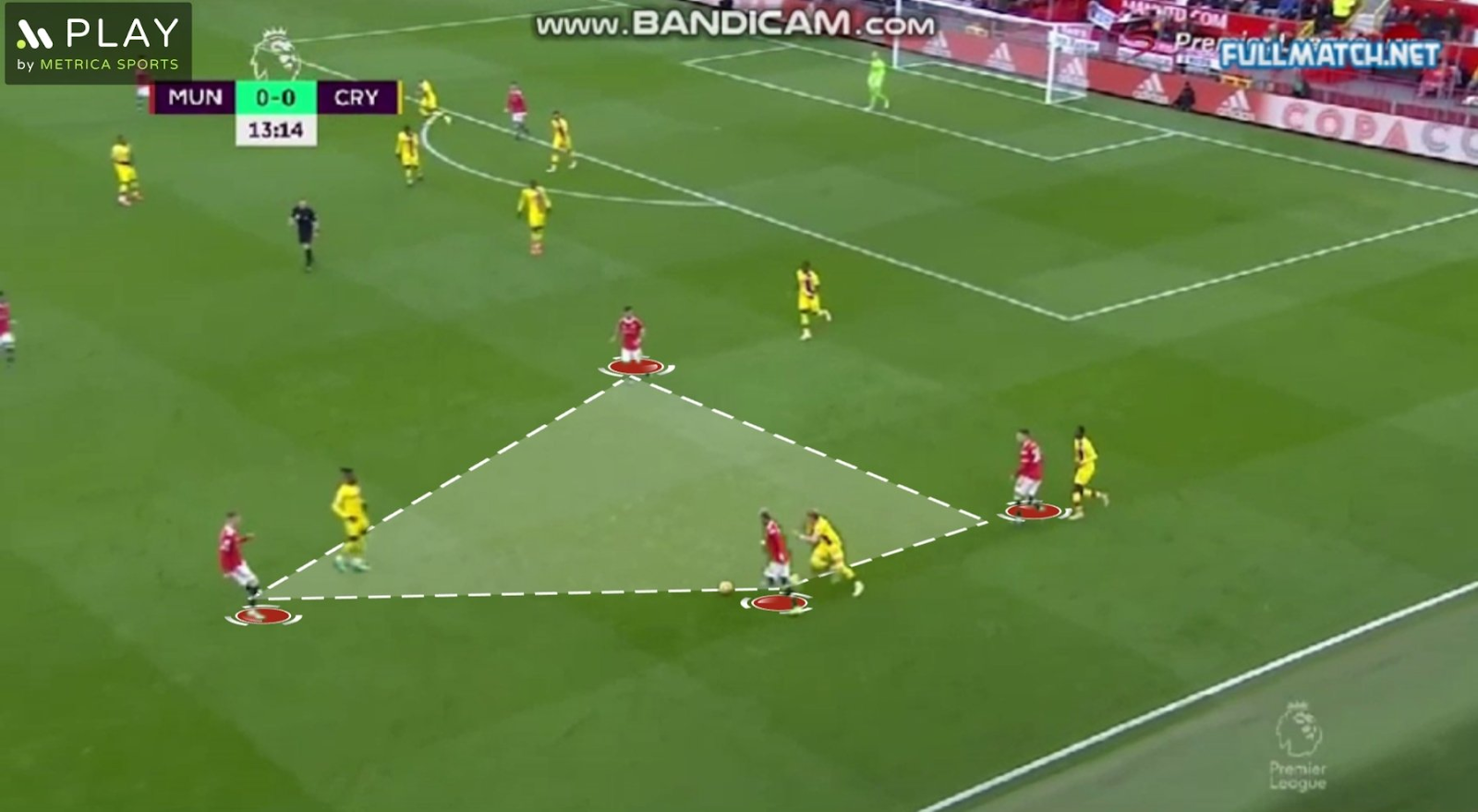 Split strikers drifting to combine on the sides with the wide players is a staple philosophy within Rangnick’s approach, as mentioned in my previous thread where I analysed his Leipzig side. It is a top method of chance creation and it is something we can expect to see more of.

United’s combination play was fluid and suited the likes of Bruno Fernandes, Rashford, Sancho and Ronaldo who prefer positional freedom. The aforementioned players often popped up on either flank in an attempt to influence proceedings. This was a calculated ploy from Rangnick.

I think it’s quite probable Dalot replaces Wan-Bissaka permanently under Rangnick considering how the German likes his fullbacks to position themselves high and wide with the two #10’s inverted. Dalot is more dangerous at every facet of attacking play, and played well vs Palace.

Within that combination focused structure, Utd could immediately counterpress off the back of it if play broke down as they had the non ball-side #6 screening the play behind the combinations on the flank along with players in close proximity around the ball. Compact is the word.

More specifically, in relation to Rangnick’s settled pressing structure. United blocked space in a 4-4-2 mid-block which was constantly ready to become aggressive once triggers were met, and as play developed in this instance it became clear who matched up with who. 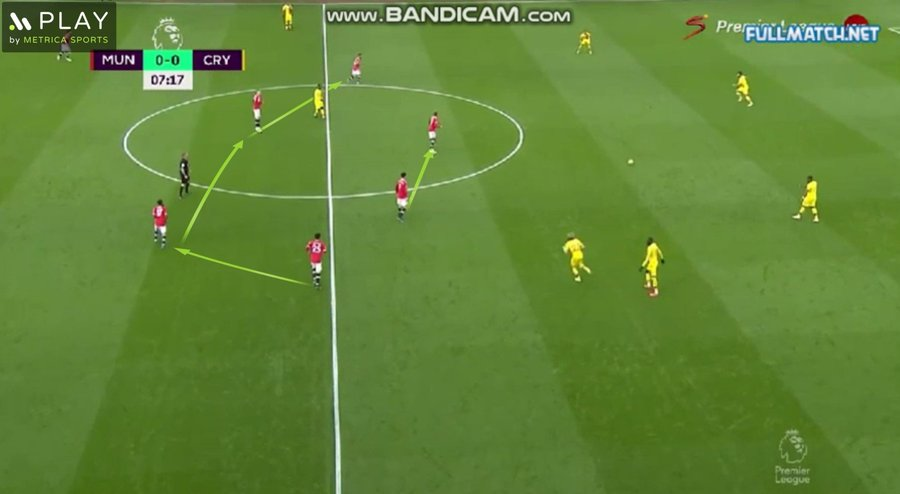 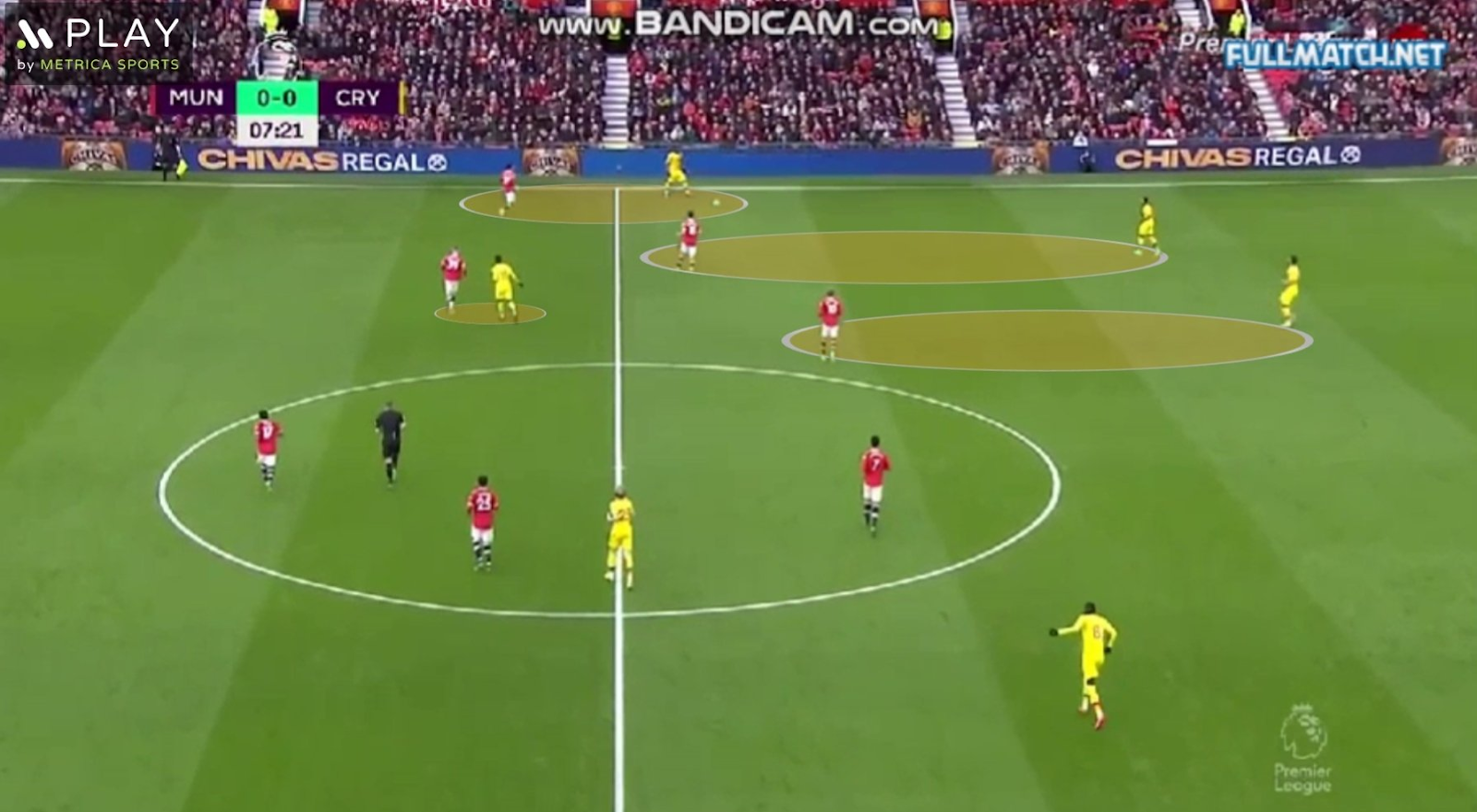 As play further developed Palace were forced back due to United’s aggression and were ultimately forced to go long before United won the ball back. This is the epitome of a compact pressing structure which Rangnick superbly implemented after such a short-time in charge. 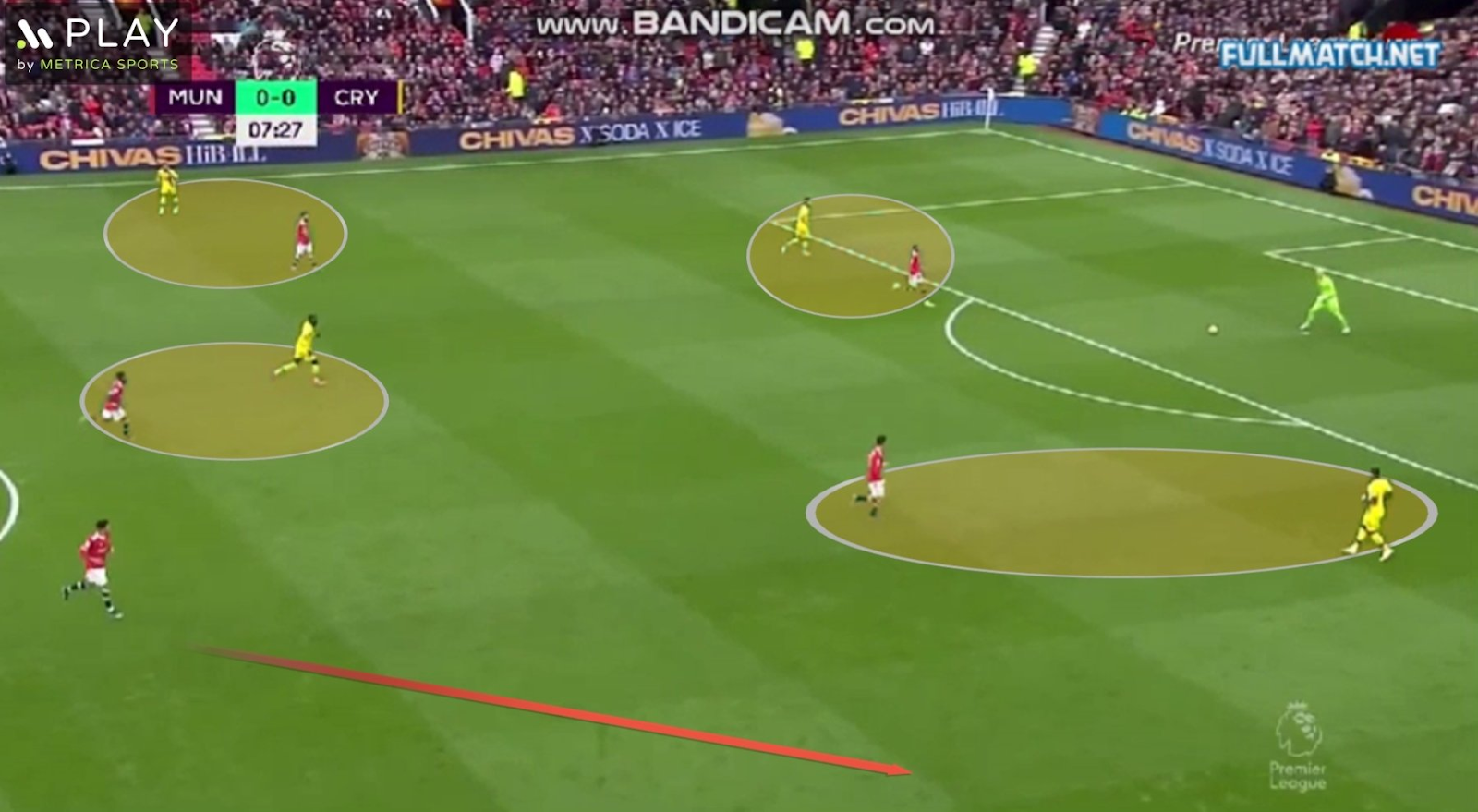 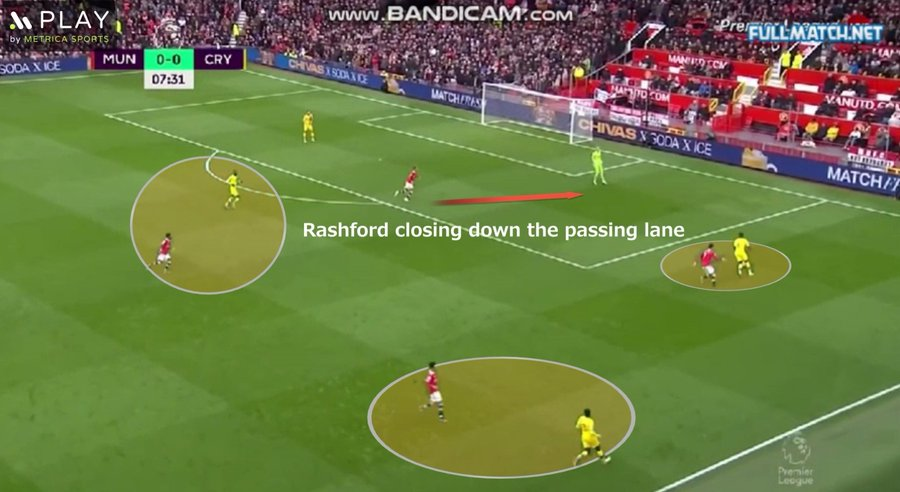 When Palace built play, United’s front two matched up with their central defenders before screening Kouyate. This regularly resulted in turnovers in the final third in favour of United along with forcing Palace to go long, which they did not want to do. 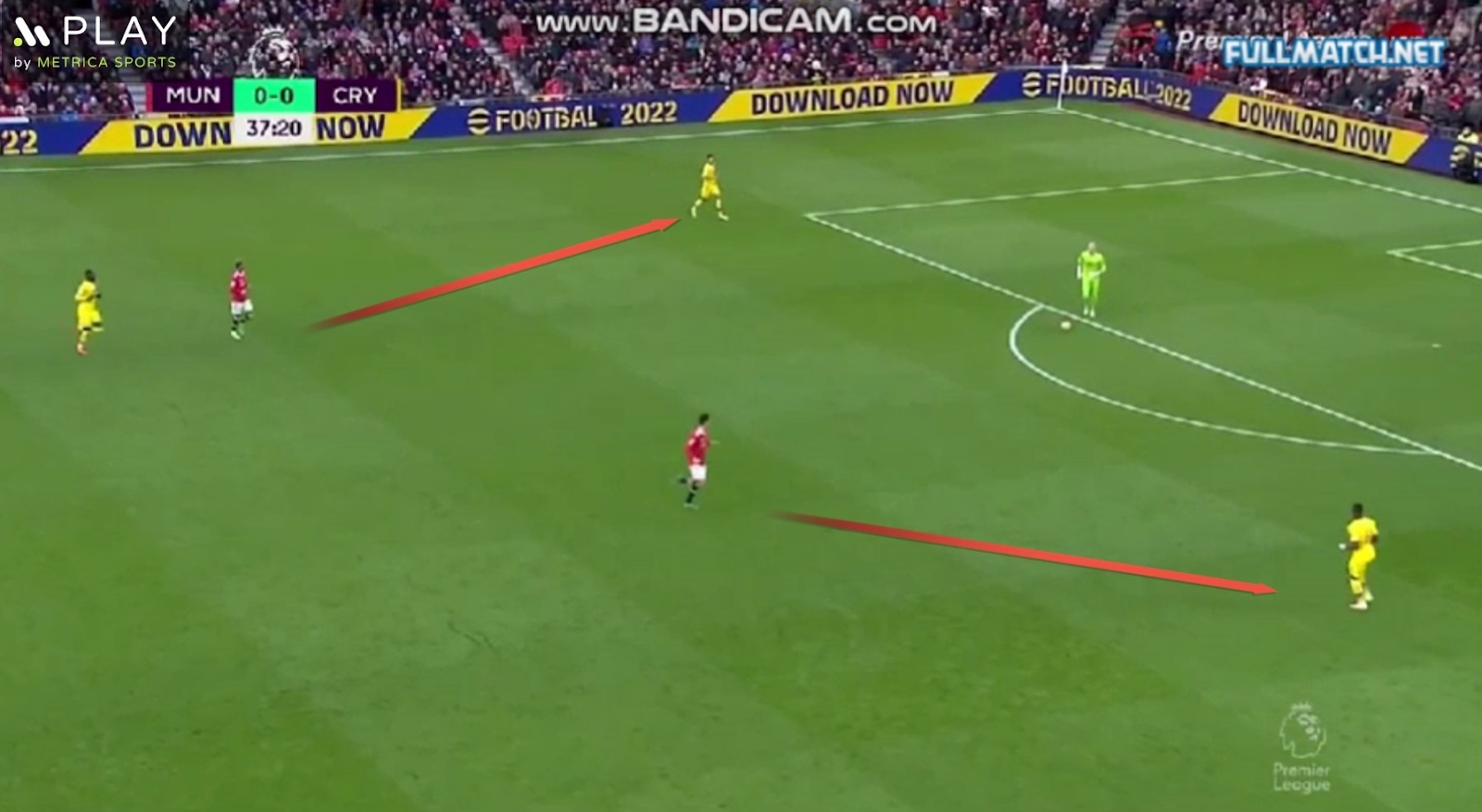 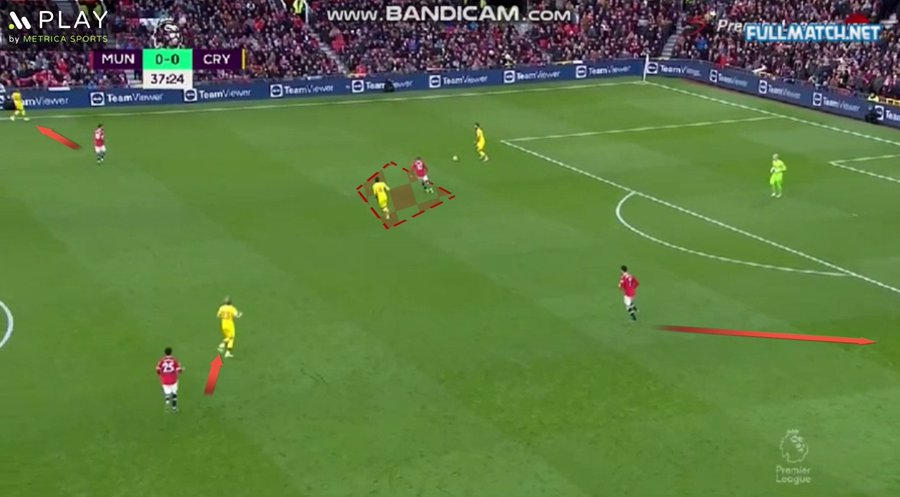 That tactical adaptation is a specific game ploy which I previously said we should expect from Rangnick. I expect different types of setups in different games. A better team would exploit this 3v2 difference but the German knows Palace didn’t have the quality to expose it. 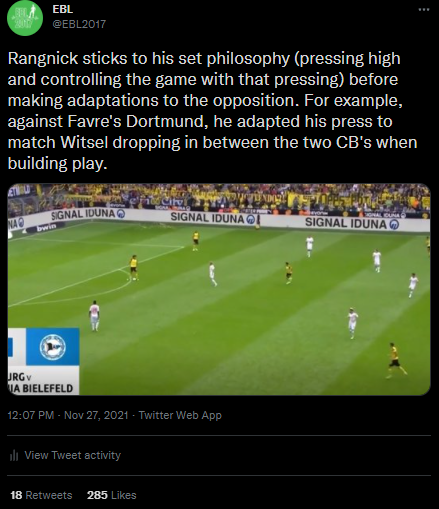 Although I expect specific adaptations from a pressing perspective based on the oppositions style of play/quality, staples within Rangnick’s style will remain such as combinations on the sides, aggressive & well-structured (counter)pressing, etc. Each game will be a tactical joy.

Overall, it was an extremely positive start for the German and United’s players took an immediate understanding and appreciation for his tactics by working hard and sticking to his rigid off-ball plan whilst also having the freedom in possession to drift & create. Exciting start!