Not only is Solskjaer a phenomenal man, but he is a top manager who brought Manchester United hope for the first time since Sir Alex left despite competing in the best Premier League ever. As a long-time Ole supporter, it’s time for one final discussion of the great man.

United were void of quality when Solskjaer first arrived. He had a plethora of ‘names’ in attack, but none of which were outstanding at that point in their careers (Alexis/Mata were finished, Lukaku overweight, Martial flattered to deceive, Rashford rarely fit, Lingard poor form).

Behind those underwhelming attackers was a clear lack of quality too. However, Solskjaer led the team from disarray when Mourinho was sacked to a miraculous run of form thanks to his cautious tactical adaptations against the likes of PSG & controlled displays against lesser teams. 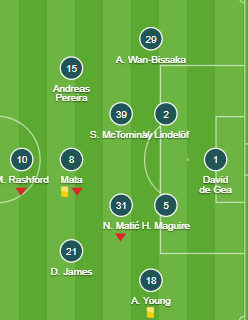 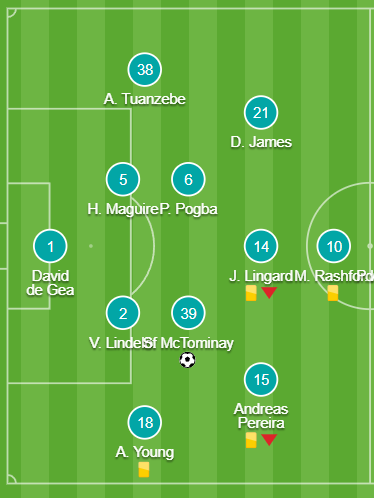 Ole sold Lukaku due to his weight gain and poor form and decided against signing an attacker that summer to a lack of options in the transfer market. Martial and Rashford were United’s only somewhat proven attackers, and both of whom rarely played together due to injuries.

Solskjaer opted for a defensive first approach as a result of the lack of quality available in forward positions in the market. This was an approach targeted towards long-term growth, & it worked. United signed a top leader in Maguire, a top defender in AWB & an outlet in James.

However, despite fielding abysmal attacks on a weekly basis, Solskjaer enabled the team to stay in and around the European spots in the best league in the world. He then signed Bruno Fernandes who was a revelation, but then Rashford was injured for the season. Disaster struck.

Rashford was injury for a prolonged period of time in the most crucial period of United’s season. However, Solskjaer guided his men to a 3rd place finish despite regularly fielding teams like this because that’s all he had available. That team is barely Premier League quality!

So, after overachieving in both of his seasons so far at the club, United were ready to make the next step. United needed back up for Bruno, a left-footed left back, a top class wide player, and a centre forward. Ole wanted Haaland & Sancho – the board gave him back ups & a free.

So, Solskjaer had to deal with the cards he was given. The board let him down but thanks to his individual player development he had nurtured a high quality squad. The likes of Shaw, McTominay, Fred, Fernandes, & Greenwood all developed nicely & United had a high potential squad.

Ole guided the team to second in the league with a significant points upgrade based on the previous season. Progression, again. So, Solskjaer showcased top talent identification and individual player development coaching. However, his tactics were similarly brilliant.

United typically played in a 4-2-3-1 in Ole’s time at the club, & the balance was always spot on. The fans clammed for VDB in the pivot but Solskjaer couldn’t play him there as that’s not his role & Bruno proved to be immeasurably durable. McFred was laughed at, but it made sense.

The team had two reliable players in the middle of the park who were positionally disciplined, pass heavy, and secure overall (although Fred’s individual quality was poor). The attack ahead of that was balanced, as was the 2-2 overload in the build-up and compact (counter)press.

There was virtually no difference in the way United played tactically in the 4-2-3-1 vs the way a Liverpool would operate in that system. They had hard working players, a compact structure, and a balanced unit, & they finished w/ 74 points w/ little depth in the best league ever.

So, at this point, it seemed like the next stage for United was to challenge for the title. However, as we all know, it all crumbled in devastating fashion. United signed 3 players who, to the masses, made them title challengers – Sancho, R. Varane, and Cristiano Ronaldo. Wow.

United fans were bamboozled with the signings, but fans who understood the game knew an error of judgement was made, and I don’t think that was Solskjaer’s doing. However, could he have prevented it and dealt with the situation better? Yes, and that’s where he let himself down

What I mean by that is United clearly needed a central midfielder, and that is what Solskjaer wanted (Declan Rice), however, the board presented him Ronaldo. This is where Ole’s “nice guy” attitude proved to be too much. He couldn’t accommodate both Pogba and Ronaldo – no way.

One had to go, and that was either by selling Pogba and signing Ronaldo, or by not signing the Portuguese. He did neither and this *ruined* the dynamics of the team. United were previously a hard-working and well drilled unit, & suddenly they became easy to keep the ball against.

Cracks began to appear against Southampton. United made some daft technical errors to ruin their control on the game and ended up dropping silly points to a far worse team. That type of daft performance continued from the likes of Maguire who is typically reliable and it cost Ole.

Then, against Young Boys, Solskjaer felt the pressure to fit all of his stars into the team and played a disjointed 4-3-3. He was unlucky because AWB got sent off and Lingard made a glaring individual error, but the cracks were getting wider and deeper.

Subsequently, United lost to Villa in another poor individual showing, played horribly against Villarreal in Solskjaer’s disjointed 4-3-3, dropped points at home to a resilient Everton team, and Rodgers tactically outwitted Solskjaer to win 4-2. Then, the Liverpool game came… 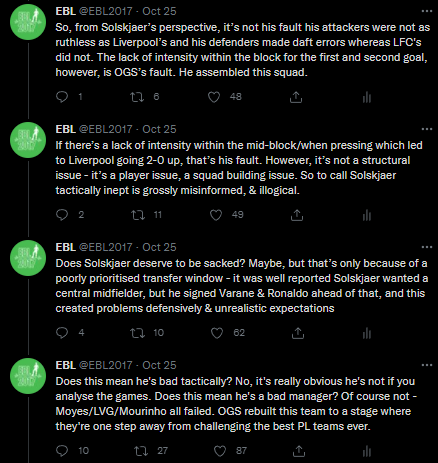 This does not mean OGS is a bad tactician. Sure, he had some tactical hiccups with his 4-3-3 & overly simplistic 5-3-2, but the tactical implementation of the 4-2-3-1 was always superb. However, what changed was on-ball quality (players’ fault) & off ball intensity (Ole’s fault).

So, Solskjaer left himself in a point of no return in which he built an imbalanced squad from an off-ball perspective. Shaw, Fred, Matic, Greenwood, Rashford, Martial, Pogba, Ronaldo & Bruno (this season) have all been poor off the ball. One/two can be complemented, but not all.

The underperformance of the likes of Harry Maguire and Bruno Fernandes was unprecedented within their careers. They have never played this poorly ever for the club. Key figures underperforming & not doing the business in possession combined with a lack of intensity off the ball has seen United’s problems under Solskjaer seem far worse than what they are. Only the likes of CR7 and McTominay can hold their heads high and be confident that they did everything in their power to keep Ole in the job. This team is still not far away at all thanks to Solskjaer.

Overall, it’s clear Solskjaer fell at the final hurdle thanks to what is arguably his only flaw, and that’s being too nice. A squad building issue occured that required ruthlessness. He built his team on work ethic and signing Ronaldo + keeping others ruined the team dynamics.

However, what a flaw to have in life, and what a great guy he is. This isn’t to say Solskjaer isn’t a leader of men, because he is – he has to be to manage Manchester United and successfully come out of many tough times at the club.

OGS will be remembered as a UTD legend but as a manager who couldn’t get them over the line b/c he’s not a top manager. I don’t buy that – I think he is, but he made a major squad building error & shot himself in the foot with the expectations that error created.