Arsenal & City have the same style – goalkeepers play out from the back, two ball playing CB’s, a marauding left back, an inverted right back, a single pivot, wingers hugging each touchline, players between the lines, a false 9, and an aggressive 4-4-2 counterpress.

Of course there are differences, but the freakish nature of the similarities has a number of interesting implications, particularly considering Arteta and Guardiola’s history. Did the protégé copy the mentor, or did the mentor learn from the protégé, or did they work in tandem?

We’ll never really know the answer to that question, but what is absolutely clear is that both are footballing geniuses. Some may say it is too early to call Arteta a genius but the rebuilding job he’s done at Arsenal to date is special, on so many levels. So, let’s get into it.

Arsenal build play in a 4-1 shape in the very first phase before transitioning into a 3-1 shape in the build-up with Tomiyasu inverted and Tierney free to combine & interchange with ESR & Martinelli on the left. City do the same except with different players, but similar profiles. 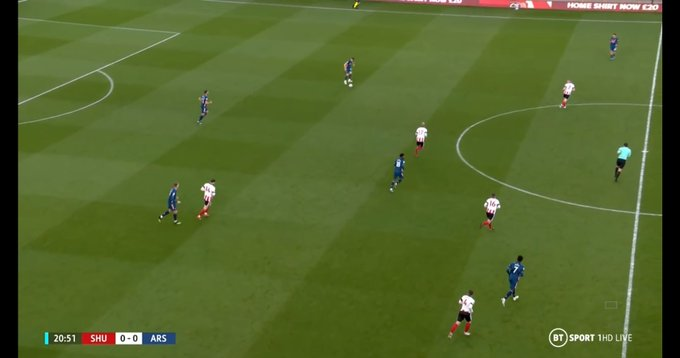 Tomiyasu is a physical specimen who is conservative in nature, & so is Walker who is typically City’s inverted fullback. Ramsdale/White/Gabriel are all similar to Ederson/Dias/Stones as they all excel technically. Tierney likes to overlap & combine, as do Zinchenko/Cancelo.

Again, more specifically, Martinelli loves to be direct, take players on and attack the box, much like Sterling does. As for the advanced #8 on the left, both managers opt for a complete midfielder profile wise i.e. someone who excels at all facets of midfield play.

Pep has Gundogan. Arteta has Xhaka. Yes, Xhaka doesn’t fit the aforementioned description, but Arteta is coaching him to play that role. They both have license to drift to take part in the build-up, combine and interchange on the left whilst being required to attack the box.

This is the first example of a clear qualitative difference that City have in their favour. Xhaka plays the same role as Gundogan, but only one does it to a top standard. Xhaka quite simply will never have the final third influence the German possesses. It’s not his game.

In the pivot, we see a closer qualitative match-up between Rodri/Fernandinho and Partey. Each of the 3 players excel physically, mentally and technically when considering they basically hold the midfield on their own in possession. Profile wise, they’re all quite similar too.

So, as mentioned previously, both teams play with an inverted fullback, and this is to help that single pivot in defensive transition and ball circulation wise (there’s an extra player in central areas when plays breaks down + players in close proximity in possession).

The inverted fullback also frees up space for the right winger. Sure they have license to overlap on occasion, but their primary role is to sit deep for a plethora of aforementioned reasons, but primarily to enable the right winger (Saka/Mahrez) to create in isolation (1v1s).

If the wide player feels like the 1v1 situation isn’t available, they can combine with Odegaard/De Bruyne in the right half space. A plethora of combinations can take place here such as overlaps, direct combination play, lay offs to cross (including the inverted fullbacks).

And finally, we have the centre forward, or as Arteta and Pep call it within their respective systems, the false 9. Bernardo Silva vs Alex Lacazette. These players have similarities (they both like the ball to feet), but are also different in a number of ways which is key to note.

Firstly, in relation to their similarities both invite passes to their feet between the lines which opens up space behind them for wide/central players to attack. This is a crucial component which is key to how both teams create and score goals.

Alternatively, Lacazette is more of a traditional centre forward than Bernardo Silva is. “Laca” is a top ball striker and likes to stay closer to the box. Bernardo, however, is a midfielder. In fact, Bernardo drops all the way back into City’s first phase whereas Laca does not.

This is where City will gain a tactical edge against Arsenal. When pressing, Arteta’s Arsenal will be compact, aggressive and man-orientated against City’s build-up. However, Bernardo dropping so deep from centre forward results in City have an extra man overload in the build-up.

Sure White or Gabriel can follow Bernardo all the way back into City’s build-up phase, but they won’t be comfortable so far away from the goal, particularly against one of the most press resistant players in the world. Again, this creates space in Arsenal’s backline.

This is the phase in the game where I expect City to excerpt control. Arsenal are inexperienced as it is so will forfeit most of the ball in the game as a result of that, & also because City’s team is more accomplished quality wise, but City also have this tactical advantage.

As such, City should dominate the ball, and good luck keeping that attack out. If Arsenal are to have a chance, they have got to be technically secure but that is also a big problem because it is so hard to do that when their press will reliably get played through.

So, when Arsenal do regain possession, City, in all likelihood, will be in an incredibly aggressive position to win the ball back quickly and Arsenal will have possession in a vulnerable area of the pitch (their own half). That’s what happens when you’re forced into a low block.

City have a technical, tactical, qualitative, and depth edge on Arsenal. If someone like Tomiyasu isn’t available, Arsenal’s build-up collapses – they have to accommodate a Holding or a Cedric. City have Walker, Cancelo, Zinchenko, Stones, Laporte, Aké…

City also have the option to play someone like Phil Foden or Jack Grealish in place of Bernardo or Sterling, for example. Arsenal’s attacking depth has improved, but their squad is hardly the final product. The likes of Lacazette and Xhaka don’t fit the bill quality wise.

The rest of their attackers are also very inexperienced in comparison to City’s i.e. Martinelli, Smith-Rowe, Odegaard vs Sterling, KDB, Mahrez, etc.

Sure, both teams play a very similar style of football but only one team has experience, strength in depth, & tactical versatility.

If Arsenal are to have a chance they must keep the ball and score within those moments. It is inevitable that they will be forced back, so when they do get a foothold of the ball they have got to be ruthless. City are good in transition, but not elite – they lack runners.

As such, these are the moments where Arsenal are most dangerous and where City are least dangerous, but as I say, good luck to keeping the ball away from City for large periods in the game. ARS need to score and make it a game of transitions whilst riding their luck when City pen them back.

However, overall, it is such a big ask of this inexperienced and potentially depleted Arsenal team, even if Arteta was COVID-free and able to guide his side through the game. Arsenal can make a game of it and rely on luck to win, but I feel City the highest probability is City walking away with 3 points.